A Trip to the Abrolhos

Jewels in the Indian Ocean:

Reporting back from an environmental outing to the Abrolhos Islands

For four days in late November 2017, I was fortunate to be able to join in a trip to the Houtman Abrolhos islands, 80km off the coast of Geraldton, WA. I was a volunteer on an environmental outing organised through the Batavia Coast Maritime Institute or BCMI (linked to the Durack TAFE college in Geraldton), and the Conservation Council of WA.

The Abrolhos islands are simply magnificent. “It is a chain of 122 islands, and associated coral reefs…. It is the southernmost true coral reef in the Indian Ocean…. one of the world’s most important seabird breeding sites.. It has a small seasonal population of fishermen, and a limited number of tourists are permitted for day trips, but most of the land area is off limits as conservation habitat. It is well known as the site of numerous shipwrecks, the most famous being the Dutch ships Batavia, which was wrecked in 1629, and Zeewijk, wrecked in 1727.” From https://en.wikipedia.org/wiki/Abrolhos_Islands 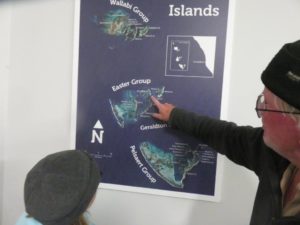 Map of The Abrolhos 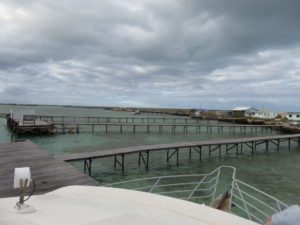 I first learnt about the opportunity to volunteer through attending a talk at the WA State NRM conference in August given by Maryke Gray, the BCMI Biodiversity Conservation Projects Manager. 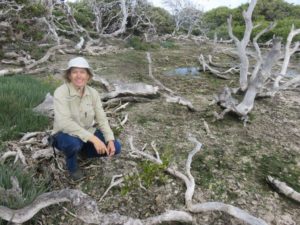 Maryke Gray, Biodiversity Coordinator, with planted Mangrove seedlings in a rehabilitation and Lesser Noddy nesting site on the Abrolhos

She is a dynamic project leader who over the past 5 years has coordinated inspiring eco- restoration works on the Islands. This has included development of site and island plans, island cleanup and sorting of marine and coastal rubbish off a third of the islands,re-vegetation with native plants to re establish sea bird breeding habitat, environmental weed removal, and helping with sea bird monitoring and banding.

The other project coordinator on the trip was Dr Nic Dunlop, of the Conservation Council’s Citizen Science program, and an Australian authority on terns. His knowledge of the islands and their conservation issues is superb. 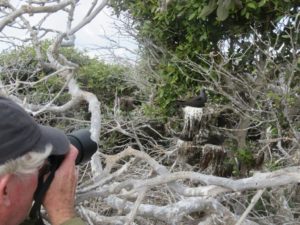 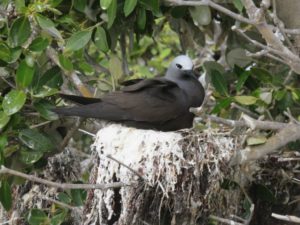 While there, I joined in the team of 20 or so people helping out in a range of interesting activities including:
• Assessing and banding sea bird populations especially sooty, bridal and fairy terns
• Weeding around recent native plantings on Rat Island
• Assessing mangrove planting survival and health
• Snorkelling amongst the coral, much of which showed signs of bleaching

I found it inspirational to be part of this expedition. I was able to learn about the wonderful work over the past two decades or environmental rehabilitation including the removal of rats and cats from Rat Island, allowing the return of tens of thousands of breeding sea birds especially Sooty and Bridal Terns.

I have come away from the Islands with a deeper appreciation of how there has been significant improvements in the management of the Western Rock Lobster industry as well as real efforts to enhance the Islands’ value as sea bird and Sea Lion breeding habitat. While it is fantastic that the Islands are being better cared for, the threats posed by climate change ( sea level rises, ocean acidification, warmer sea temperatures) are very real.

Photos from my trip are viewable at my facebook site at https://www.facebook.com/BasilSchur

Background information on these islands is available at https://en.wikipedia.org/wiki/Abrolhos_Islands
And on the Maritime Institute at
www.centralregionaltafe.wa.edu.au/…/batavia-coast-maritime-… 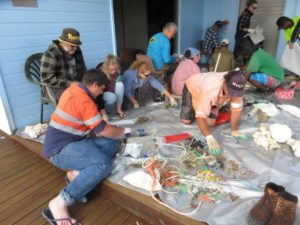 Classifying marine rubbish collected from 3 islands in the Easter group 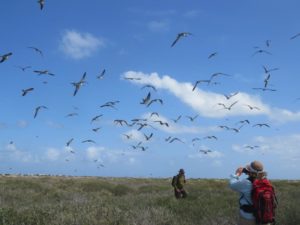 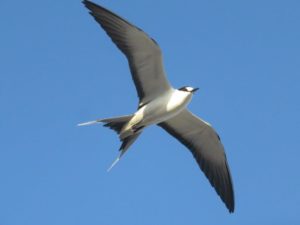 A Sooty Tern on Rat Island. During the vist over 150 of these birds were banded as part of a long term citizen science program 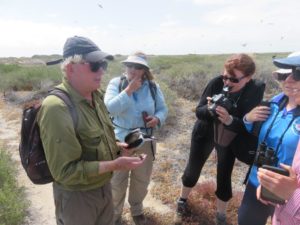 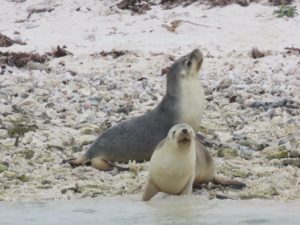 the Endangered Sea Lions at the Abrolhos 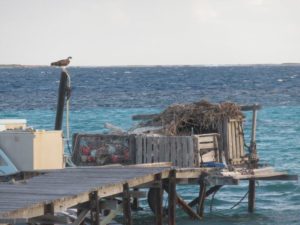 Ospreys nesting on a jetty at Rat Island