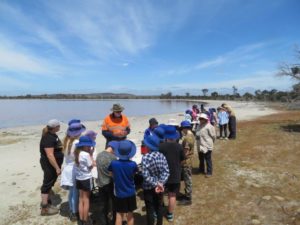 On Thursday 25th October 2018, Green Skills and Gillamii Centre held a wetland citizen Science day on three special salt lakes near Cranbrook. Geraldine and Steve Janicke, aquatic ecologists, carried out water and invertebrate fauna monitoring of the lakes with the keen interests of a class from Cranbrook School.

Three lakes in the North Stirlings region were visited during the day; Tom South Lake which was recently fenced through State NRM and Federal landcare funding, as part of measures to protect the threatened Hooded Plover species, and Bob’s Lake with its popular bird-hide and prolific aquatic and bird life.

Craig Carter of Earthrise Productions, filmed the days events for the next documentary in the Gondwana Wetland series on the Green Skills YouTube channel. Stay tuned for when that film comes out !

Green Skills’ volunteer Tony Peterson carried out a bird survey, finding many Red necked Avocet and Australian Shelduck using Tom South at the moment. Karina Bateman, of the Gillamii Centre and local farmers Cameron Willamson and Sam Lehmann, also were interviewed during the day.
John Chandler brought out his drone and managed to get some aerial footage of the lakes despite the windy conditions.

The event was supported by the Koorabup Trust, the Lehmann Family, and the Gillamii Centre. 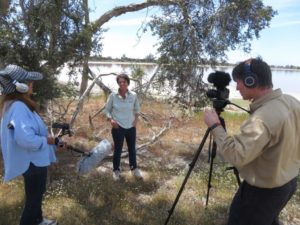 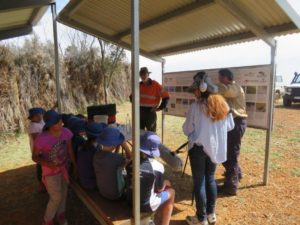