Since 2011 Green Skills has conducted an extensive program of activities to assist an enthusiastic network of bird conservationists in raising the issues affecting migratory shorebirds. 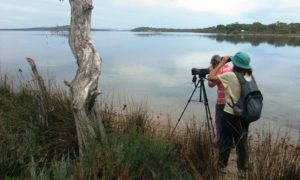 An annual survey of shorebird populations has been undertaken since 2011, culminating in a conservation report, plus seminars and workshops.

A range of awareness raising activities and events have also been developed – such as installing signage, distributing newsletters.

Since 2013, an annual South Coast Festival of Birds has been a major community involvement program.