Green Skills partnered with Karrak Consulting in developing and delivering a pilot leadership program for the southern regions of Western Australia in 2015 funded through the WA Department of Regional Development.

16 regional emerging leaders from across different sectors of local communities signed up for the  4 x 3.5 day weekend workshops in York in June, Denmark in July, Dryandra in September and Donnelly River in October. 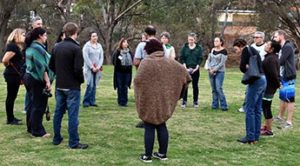 Participants engaged in private coaching, group action learning, phone sessions and working on their own community projects between the weekend gatherings.

Feedback from the majority of the participants was outstanding and many of them are more fully engaged in initiatives in their own communities with greater confidence in themselves and how to engage others.