Green Skills has been actively controlling senecio glastifolius with the support of the City of Albany, DPaW and South Coast NRM since 2006 when it was first brought to our attention.

A native South African species, senecio has the impact of outcompeting our native species, and spreading seed on the summer easterlies along the south coast. Uncontrolled, it threatens our global biodiversity hotspots in the Stirling, Fitzgerald River, and West Cape Howe National Parks. 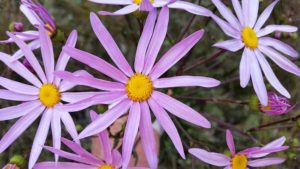 This highly invasive weed quickly spreads through disturbed or burnt areas, creating a monoculture and diminishing opportunity for native species regrowth. It is particularly invasive in damp open areas where it can dominate understory growth. It can also spread rapidly along fire breaks.

Senecio was spread to Mt Clarence from a home garden before 1986, and has spread to many areas, with the highest priority along the coastline in Sandpatch Reserve. The seed can spread on the summer easterlies for over a kilometre, making the best action to remove the weeds before setting seed.

This project is supported by funding from the Western Australian Government’s State NRM program.